The western village of the Cinque Terre is cut in two parts by San Cristoforo hill which divides the oldest part of the town, with its medieval historical centre, from the modern residential neighbourhood which stretches along the beach.
The historical origin of the town dates back to 643, when the people living on the hills settled near the sea in order to escape from the barbarian invasion.
Old Monterosso ispractically intact with its house-towers, crossed by narrow streets (here called “carruggi”).
In order to avoid invasions from the sea, several defensive works were built. Part of this system are the castle overlooking the sea with its three round towers, some parts of the town walls, the medieval tower, now the bell-tower of the Church of San Giovanni and the Aurora tower, one of the thirteen towers that in the 16th Century surrounded the town.
The modern residential neighbourhood is developed along the seafront in the bay of Fegina.
The vegetation surrounds the town of Monterosso like an embrace and its beach, the largest in the Coast of Cinque Terre, its crags and the crystal water of its sea make this little town one of the cosiest in the Eastern Ligurian Riviera.
In the past, Monterosso had an important fishing fleet, that made the town famous for its fish, overall the salted anchovies and the fried fish preserved with vinegar in wooden kegs (“scabeccio”). 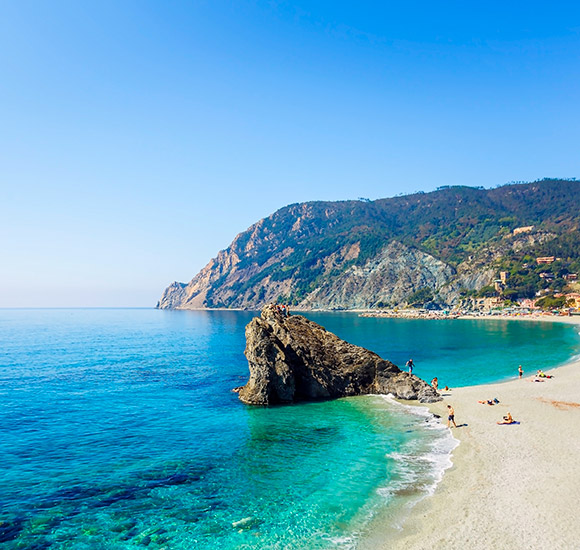 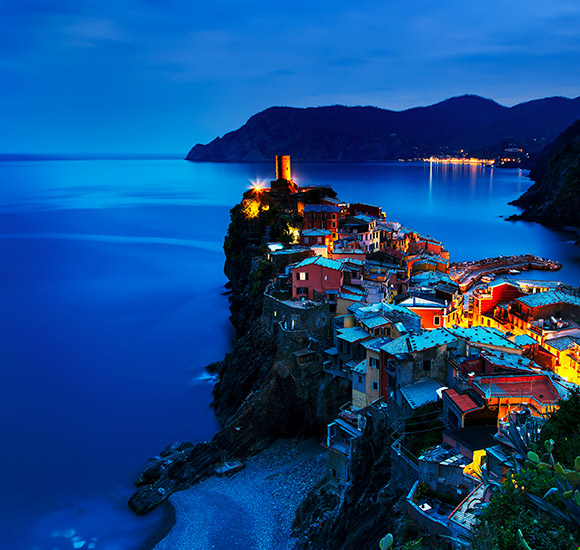 Founded in 1000, Vernazza is the town that more than the others in the Cinque Terre still preserves the aspect of a typical sea town, thanks to its sure and convenient natural harbour and to a maritime tradition known from the antiquity.
It is the only natural harbour in the Cinque Terre, and the town is developed along the torrent Vernazzola (now covered) and along the hillside that hides the village from the sea. Steep and narrow tracks walk down towards the main road leading in a small square situated near the harbour.
The presence of architectural elements like loggias, arcades and portals demonstrate that the level of living in the past was economically and socially higher than the other centres in the cinque Terre.
In fact it appears still nowadays as a noble and elegant town lying on a crag.

Corniglia is completely different from the other villages of the Cinque Terre, as it lies at the top of a 100 Metre high point inaccessible from the sea.
To reach the town you have to climb the “Lardarina”, a long brick staircase made by 33 flight with 377 steps, or going along a carriageable road that connects the railway station with the town. The village is developed along the main road, via Fieschi, where our apartment Stella Marina is situated ; the houses face the sea from a side and the road from the other side. 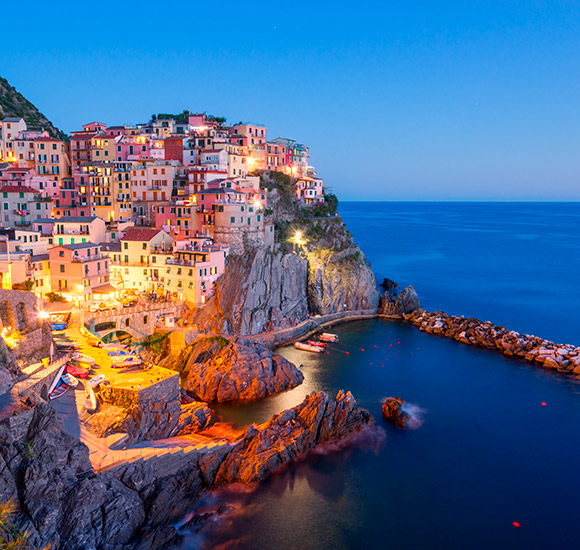 Manarola lies on a precipitous point of dark rock, with its small harbour protected by two crags. Behind the village you can admire the typical terraces with vineyards and dry walls; going towards the sea you will find suggestive footpaths and unforgettable beauty spots.
The most famous footpaths is the Via dell’Amore (lovers’ road), connecting Manarola and Riomaggiore. Going along this short track carved into the rocks overlooking the sea means looking across the green of the hills and the blue of the sea.
Worth visiting is the big luminous crib (from 8th December till 20th January) built on the hill “Collora” in front of the town. Going through the romantic streetlet leading to Manarola is a wonderful experience: you can admire breathtaking views, listen to the waves breaking on the shores, breath the unmistakable saltiness.

With its vertical development, the village is crossed by stairs and staircases passing through the houses crowded together with their slate-roofs and their typical colours.
Under the main road the torrent Rivus Maior, which gave the name to the village, flows. In Riomaggiore you meet the famous Via dell’Amore (lovers’ road), the famous footpath carved into the rocks overlooking the sea.
Our apartment La Conchiglia is situated in the high part of Riomaggiore with beautiful sea view. 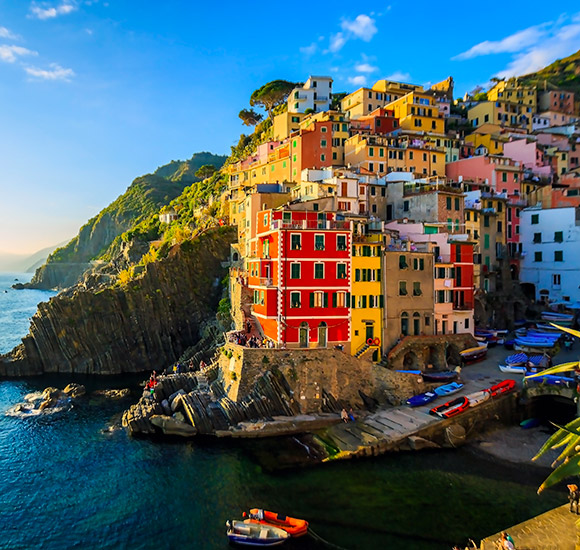 The National Park and the Marine Reserve

First protected area and then Regional Park, the Cinque Terre became 1999 a National Park, the instrument to protect an unique environment, made by coast overhanging the sea with bays and small beaches, thousands Kilometres of dry walls to mark the terraces for the wine-growing, typical houses, medieval towns, sanctuaries, panoramic footpaths overlooking the sea.

The territory looking onto the coast of the five villages between the Point of Punta Mesco in the west and the Point of Montenero in the east, was declared Protected Marine Area in 1999 to protect the numerous sea fans and Posidonias forming deep grasslands that give shelter to innumerable organisms and rare species. Moreover, for the presence of Whales and Dolphins these waters are part of the Whales’ sanctuary.

When the Vineyards cover the hills, the wine on the table cannot miss: dry white table wine D.O.C., called simply Cinque Terre, the “Sciacchetrà”, rare and valuable syrupy wine made from raisins, the “limoncino”, liqueur made from lemons, with them during Whit the village of Monterosso is decorated during the festival of the lemon.
The food of Cinque Terre preserves almost intact the characteristics of the ancient times. Do not miss: trofie made by corn or chestnut flour with Pesto-sauce, the vegetable quiches made with borage, beets, artichokes, zucchini, potatoes and leeks, tagliatelle with mushrooms. For fish lovers, fried anchovies, whitebait-fry, cuttlefishes, sardines, octopuses and shanks.
With the fish we have not to forget the oregano, the herb used by the inhabitants to scent tomatoes.