After Levanto, the GREEN BLUE trail contenues on, reaching Punta Mesco where the 5 fabled villages known as Cinque Terre begin. It then leads to Monterosso, Rio Molinaro, Vernazza, Prevo, Corniglia, Manarola, Via dell’Amore, Riomaggiore. The Cinque Terre end with this village but a wonderful path reaches Montenero, Campiglia, Portovenere. 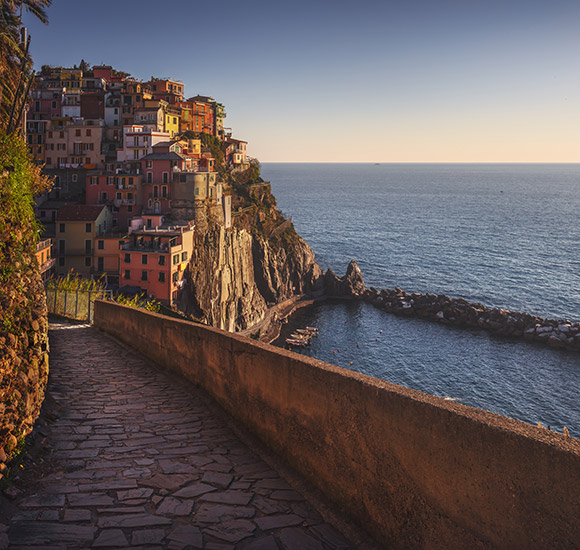 The Cinque Terre footpaths:
from Portovenere to Monterosso

Difficulty: fair - KM 4.8 - 2h 15’
The path connects Portovenere to the town of Campiglia (400 metres above sea level) and begins from the famous square Bastreri. The first part is a steep staircase that becomes less difficult during the climb. The walk offers breathtaking panoramas over the Palmaria and Tino islands and all over the coast. The path continues towards a thick maquis until the town of Campiglia, whose entrance is distinguished by the tower of a windmill.

Difficulty: low - KM 3.2 - 1h
This paths leaves from Campiglia and continues along a relatively flat land among wonderful cork oak trees. The rest of the track is characterized by ups and downs until Telegrafo (513 metres above sea level).

Difficulty: low - KM 3 - 1h
From Telegrafo col, beauty spot over the Gulf of La Spezia, reach following a flat path the Bramapane hill, where you can find the interesting ruins of a military fortress. Next stop is the pass of la Croce (637 metres above sea level), from where you may decide to continue westwards or to reach Riomaggiore with the footpath 01.

Difficulty: medium - KM 2,5 - 2h about
The footpath starts with a steep descent in an unsurfaced road, the so-called “Sanctuaries path” that becomes a wide beaten earth track. The footpath continues among woods and vineyards and reaches the town of Riomaggiore that welcomes the guests with its famous castle.

The most famous of the Cinque Terre trails starts from the town of Riomaggiore, the Via dell’ Amore, now under renovation. To reach Manarola from Riomaggiore today is used the Beccara path.

KM 1 - 25 Min.
The famous “Via dell’ Amore” (lovers’ street) is the best known track both for its beauty and for its approachability. It is also the first part of the renowned Sentiero Azzurro (Blue Trail).
The “Via dell’Amore” is really appreciated because it is not particularly difficult and overall for its unforgettable beauty especially during the sunset.
The “Via dell’ Amore” leaves from the staircase located in the square of Riomaggiore railway station and it continues until Manarola along the coast on a flat track going deep into wonderful panoramas created by the Mediterranean vegetation.
As already said, the “Via dell’ Amore” is the first part of the Blue Trail, that in the past was the access to the powder magazines used for the construction of the railway line Genoa-La Spezia. The “Via dell’ Amore” is accessible also from the town of Vernazza with a path directly connected.

Difficulty: fair - KM 3,7 - 2h 15’
The footpath 6 leaves from Manarola and goes up until the fork of Pì de Fesse: from here we find the starting point of two different footpaths that reunite after the “Sanctuaries path” Volastra-Telegrafo.
In that point the footpath 6 goes up towards the small abandoned town of Bovera and continues to reach the south-eastern con of Monte Marvede (666 metres above sea levels).

Difficulty: medium - KM 3,8 - 2h 30’
The first part of the track coincides with the Footpath 06 until the fork of Pì de Fesse from where it leaves a steep staircase going through the vineyards. The staircase finishes into the “Sanctuaries path” among pines and chestnut trees: at this point the climb grows in order to reach finally the Costa Galera (729 metres above sea level), where the path reunites with the footpath 1.

Difficulty: low - KM 1 - 1h
Start from Manarola railway station passing by the tunnel and reaching the Marina from where you can choose to climb through the old track or to walk along the seafront until Palando ramp. From here climb until you cross the Footpath 02 from where the track continues flat along the underneath beach of Corniglia. In the middle of the track there is an iron bridge reuniting the two parts of a landslide.
The path continues until the “Lardarina” staircase that leads to Corniglia.

Difficulty: low - KM 4 - 1h 30’
The path leaves from Corniglia and climbs through a large olive-yard until reaching a breathtaking beauty spot. The track crosses Guvano basin and goes up to the small town of Prevo (208 metres above sea level), where you can find a refreshment point. Here the descent to Vernazza begins, the first part is made by steps that lead to the town after crossing maquis rich in agaves and Indian figs. In the last part you will meet a medieval tower.

Difficulty: medium - KM 3 - 2h
The oath leaves from Vernazza and among vine- and olive-yards to Cravarla valley (track between 150 and 200 metres above sea level). It reaches Costa Linaro and the small valley of Fosso Mulinaro, where frequent fires dramatically changed the landscape.
The next valley, called “Acquapendente”, is an oasis withvegetables, lemon trees and grapevine growing on it. From where starts a steep staircase toward the town: here the footpath is divided into two parts: if you go to the right you will directly reach Piazza Garibaldi in the centre of the town, if you go to the left you will reach the rocks and the small beach.

From la Spezia, reach Biassa and then the Telegrafo hill, from Monterosso, follow the trail Pignone-Levanto until Termine, where you enter in the trail.

Riomaggiore-Sanctuary of Nostra Signora di Montenero
Km 3,5- 1H
The departure is located nearby the car park where the path begins. At the beginning and for a long part the path follows the canal of Riomaggiore, then the road begins uphill among the vineyards until you reach the sanctuary. Near the square there is the path leading to Portovenere..

Manarola- Sanctuary of Nostra Signora della Salute
1H
Departure from the car park in Manarola; at the exit there is a mule-track reaching 268 metres from where the trail begins. Take the road on the left and continue until Volastra. From here going on the left you reach the sanctuary in a short time.

Corniglia- Sanctuary of Nostra Signora delle Grazie
1 Hour 30 Minutes
Take the road from Corniglia to Vernazza. Arrive in Prevo, then turn right and after that you meet the carriageable road you have to follow for 300 metres direction Corniglia, until you find a steep mule-track leading to the sanctuary.

Vernazza- Sanctuary of Nostra Signora di Reggio
Km 1,2 - About 45 Minutes
Leave from the railway station and take the road to the cemetery. Turn around it and continue along the ridge eastwards. The footpath is paved and corresponds to the Via Crucis leading to the square of the sanctuary surrounded by century-old trees.

Monterosso- Sanctuary of Nostra Signora di Soviore
Km 2.5 - 1Hour 30 Minutes
Leave from the last part of Via Roma, where the mule-track begins to climb among olive-trees and vineyards. Cross the wood until you meet the coast road you have to cross. The mule-track passes by a pinewood from where you can see some small Via Crucis chapels. After 200 metres you arrive to the sanctuary surrounded by century-old holm-oak trees.